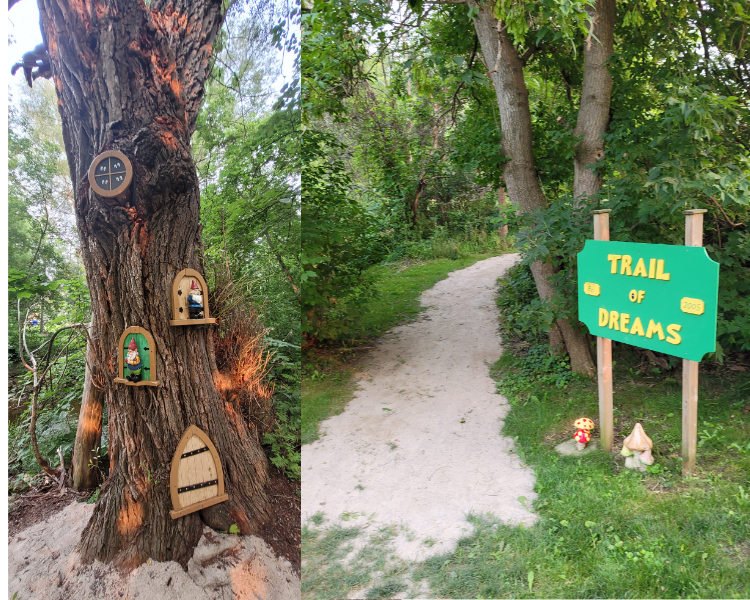 The Trail of Dreams in Neustadt, Ontario.

An easy walking trail designed to spark imagination in families.

Journey along this short creek-side trail and discover it’s many inhabitants: mythical, magical and real.

The trail is located off Queen Street in the Village of Neustadt’s beautiful downtown or across the walking bridge where it connects with Lions Park.

It is one of the signature features of the village located one hour north west of Kitchener -Waterloo or 45 minutes south of Owen Sound. It is appoximately three hours from Toronto. Located in the Muncipality of West Grey, make Neustadt part of a day trip or staycation to Grey/Bruce County. 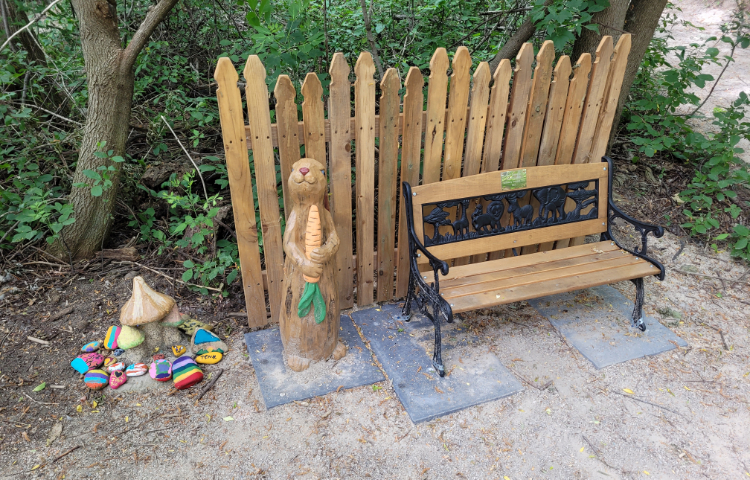 Filled with surprises to spark the imagination of children, The Trail of Dreams is one of Grey and Bruce County’s best kept secrets.

Magical displays featuring woodland animals, gnomes and other characters greet visitors on their journey along the trail that follows Meux Creek.

“I wanted this to be a place where families could be encouraged to spend time outside, daydreaming with their kids,” said Trail of Dreams Founder, Gerry Hilgendorff.

It was a Mother’s Day walk through the downtown and park that Hilgendorff was daydreaming himself of the potential the village has back in 2005 that started the project. He realized something could be made of an unfinished road extension from back when he was a kid growing up in the village.

Shortly after, Hilgendorff planned the trail and gained permission from the Municipality of West Grey. With the help of some members of the Neustadt Lions Club, an old storage building was tore down and initial steps were taken that day in the summer of 2005 to open a path that would connect the village’s downtown with Lions Park at the north end of the community. Hilgendorff almost daily, continued cutting and working the trail that soon grow into an attraction for families along the wooded trail and creek.

While it was a narrow walking path at first, Hilgendorff worked every year to remove stones and tree roots to keep it as accessible as possible. In 2016, the municipality put a pedestrian bridge in place that connects the trail with Neustadt Lions Park, completing the initial dream Hilgendorff had for the trail.

But work continued with Hilgendorff adding displays for children every year and improving the trail conditions. This summer, at 81 years old, Hilgendorff and a handful of volunteers spread more than six tonnes of stone dust on the trail making the hike even easier for families with strollers and young children.

In addition, more imagination-inspiring features were added this summer so that there is something to surprise youngsters around almost every corner while preserving the natural beauty of the woodland.

“Most kids seem to love meeting Wilson or looking for the faces in the trees by the gnome houses. I’ve heard several parents describe the trail as magical,” said Hilgendorff of some of the features along the walk. Wilson is what local kids named one of the trail exhibits.

“Make sure you look up in the trees, you never know what’s going to be looking back,” said Hilgendorff, alluding to another of the trail’s magical features.

One of the newest features is the trail’s Tribute to Mothers. Hilgendorff dedicated the almost life-size stone statue of a mother holding her two children to the mothers who visit the trail and the dreams they have for their children.

“The whole thing is about inspiring people from children to their parents,” said Hilgendorff.

From wild garlic and ferns to Solomon’s seal and wild blackberries, the trail blooms and comes alive throughout the spring and summer.

“If you time it right, you can even watch rainbow trout make their way up the waterfall to spawn in the spring,” said Hilgendorff.

“We walk this trail every day and meet lots of people visiting it for their first time. It’s a wonderful addition to the town,” said Neustadt artist Gary McLaughlin. “It’s a great way to connect with our community. You can stroll down the village’s main street right to the trail and park.”

Hilgendorff meant for the trail to do just that—connect the businesses downtown from the dam at the village’s south, through to the park at the village’s north end.
“It’s a perfect way to spend a morning or afternoon, daydreaming as you explore the village and the Trail of Dreams,” said Hilgendorff.

Both the trail and park can be hard to spot with the trail’s downtown entrance just off Queen Street toward Mildmay and it’s other entrance across the pedestrian bridge in Lions Park off Grey Road 10 toward Hanover. 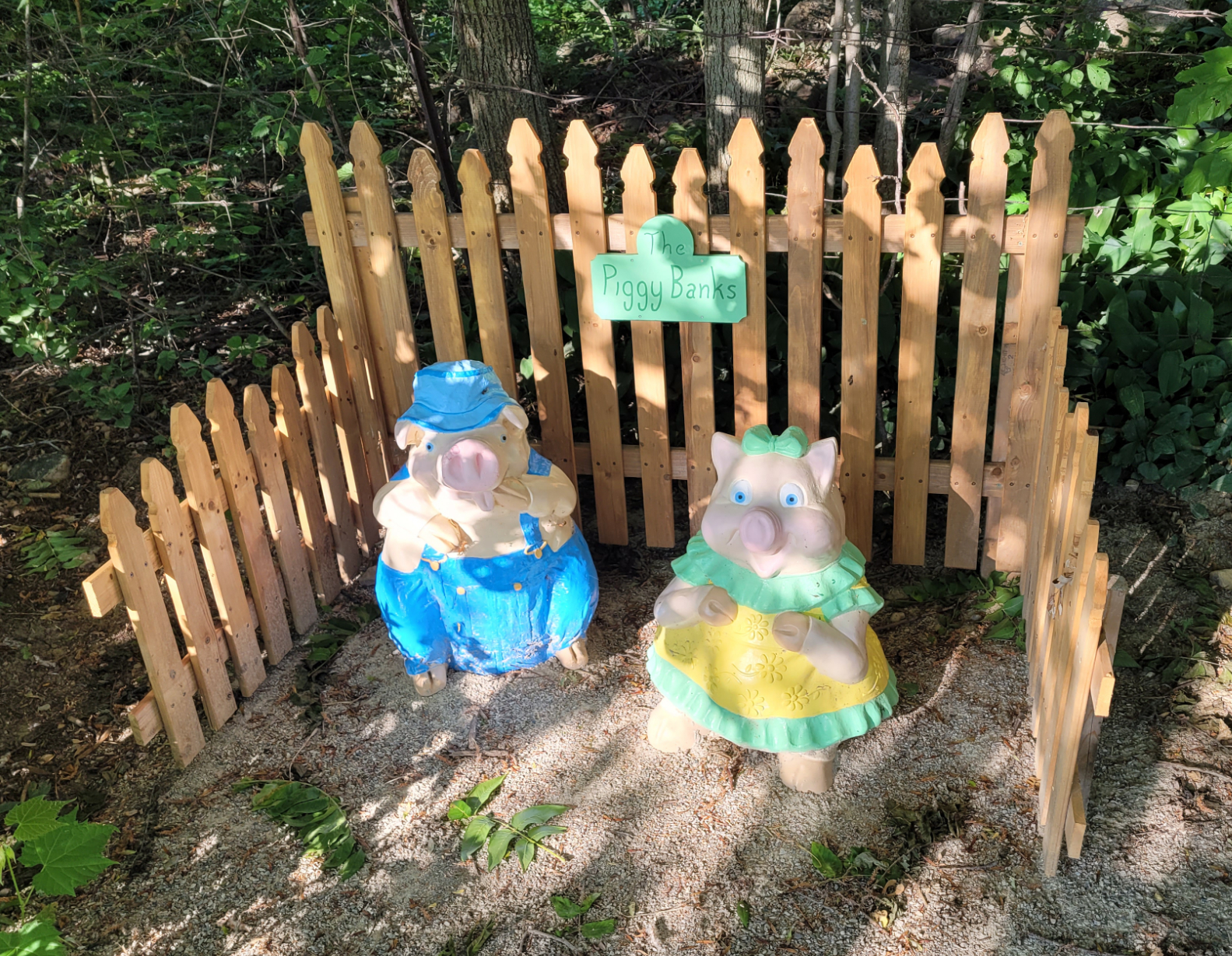 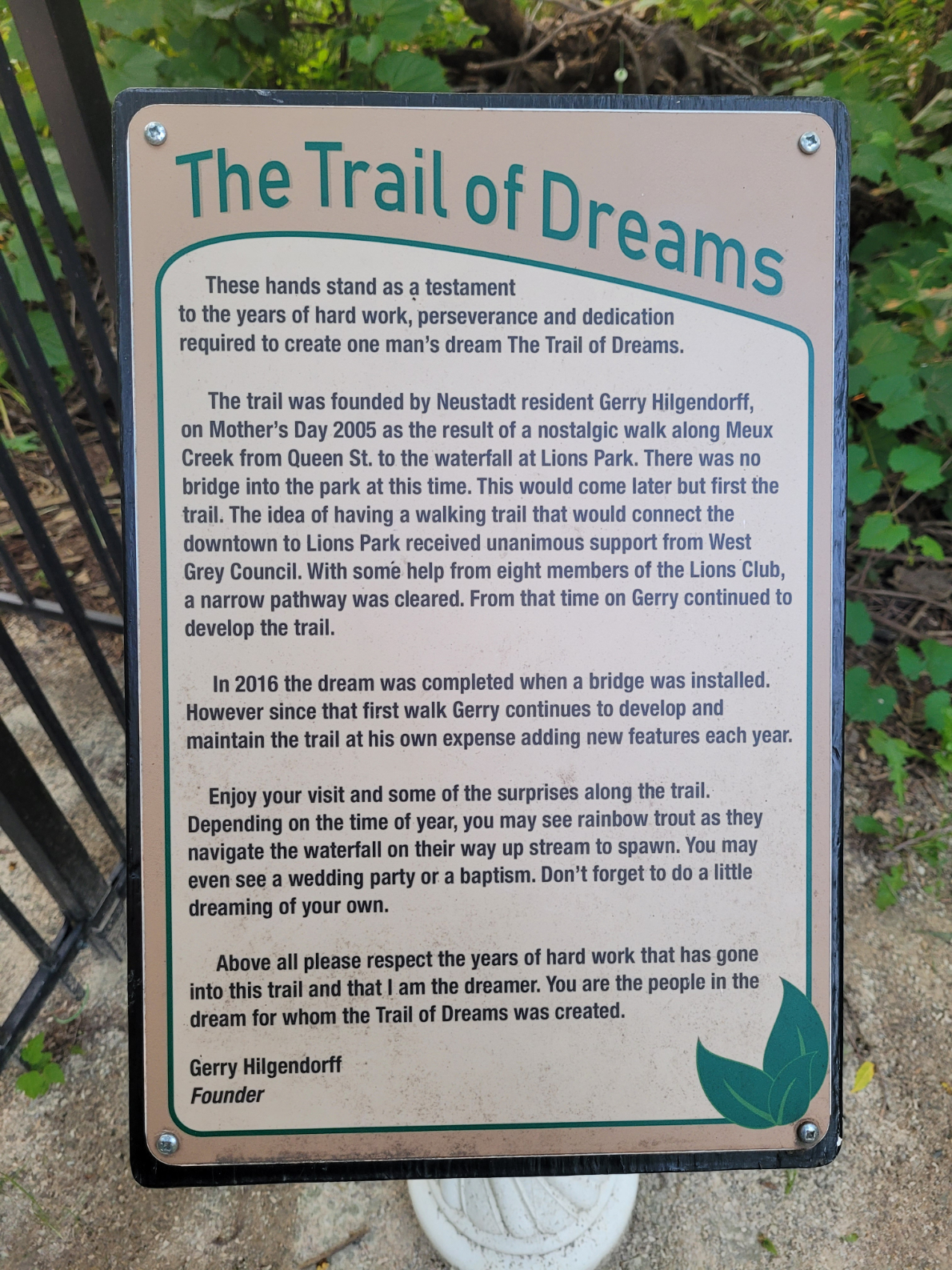 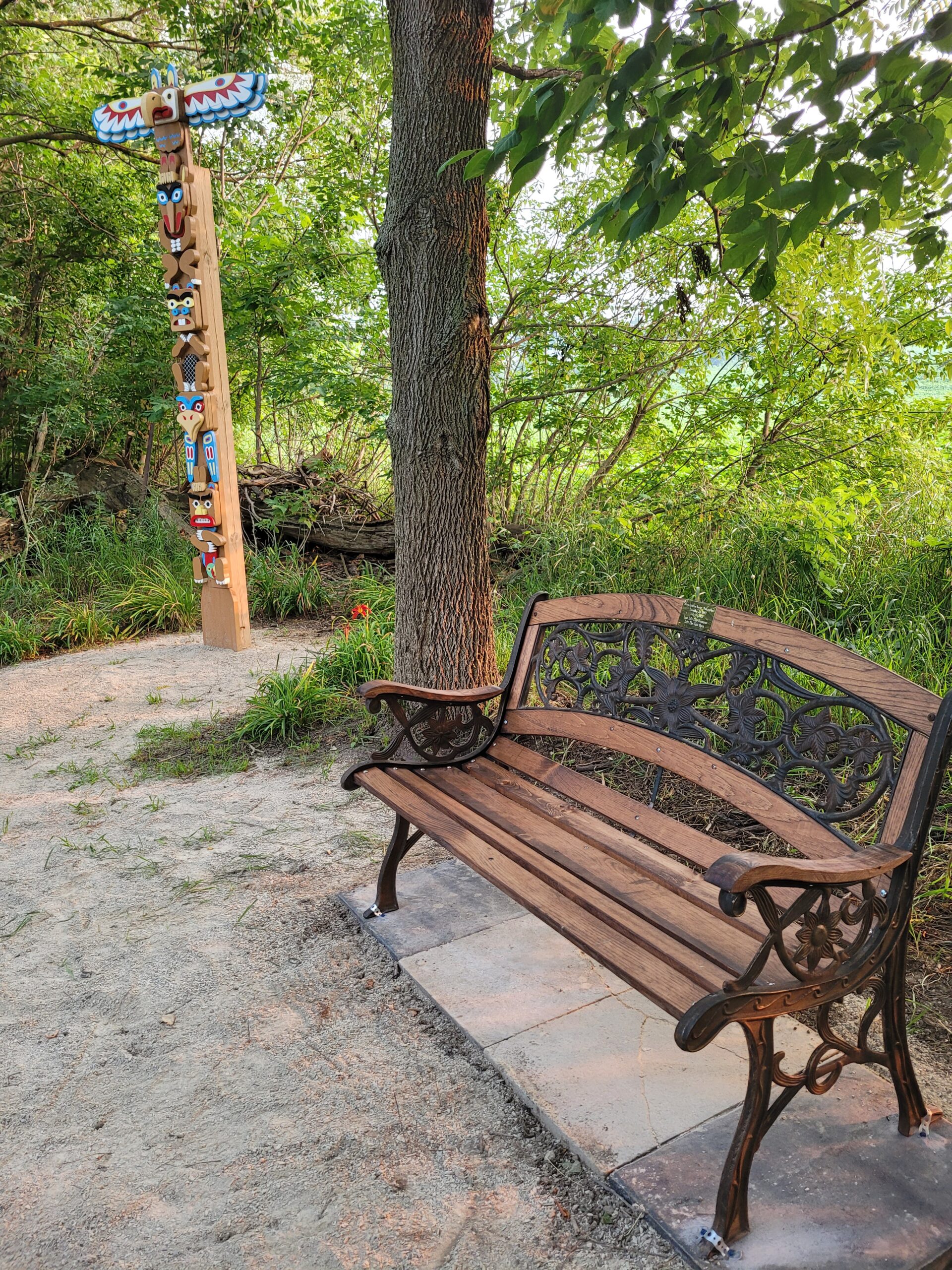 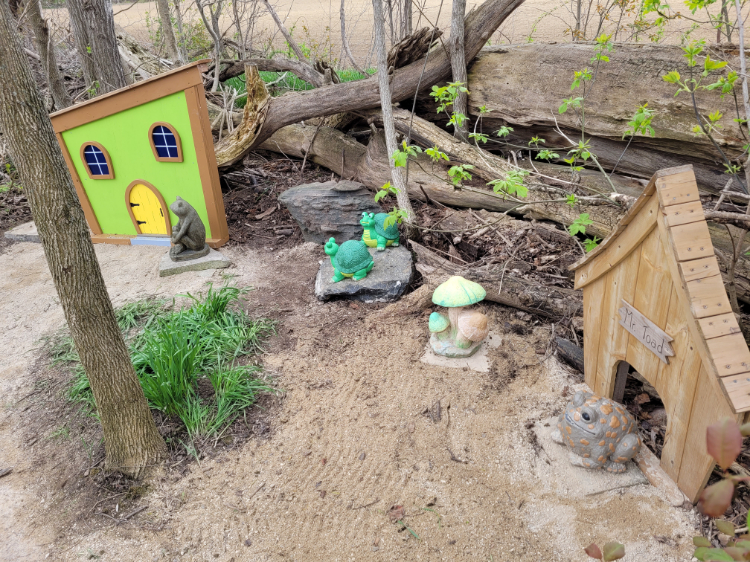 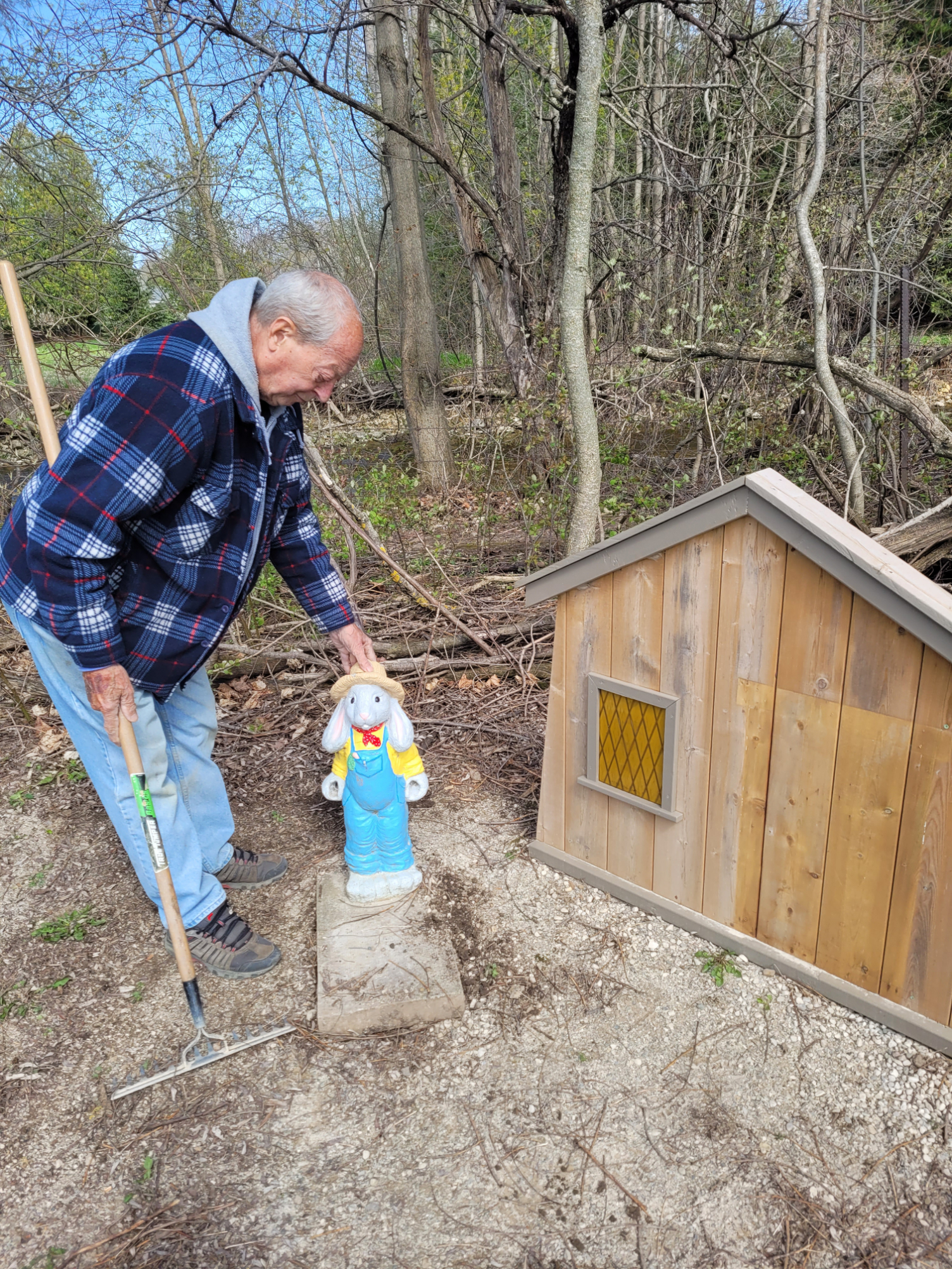 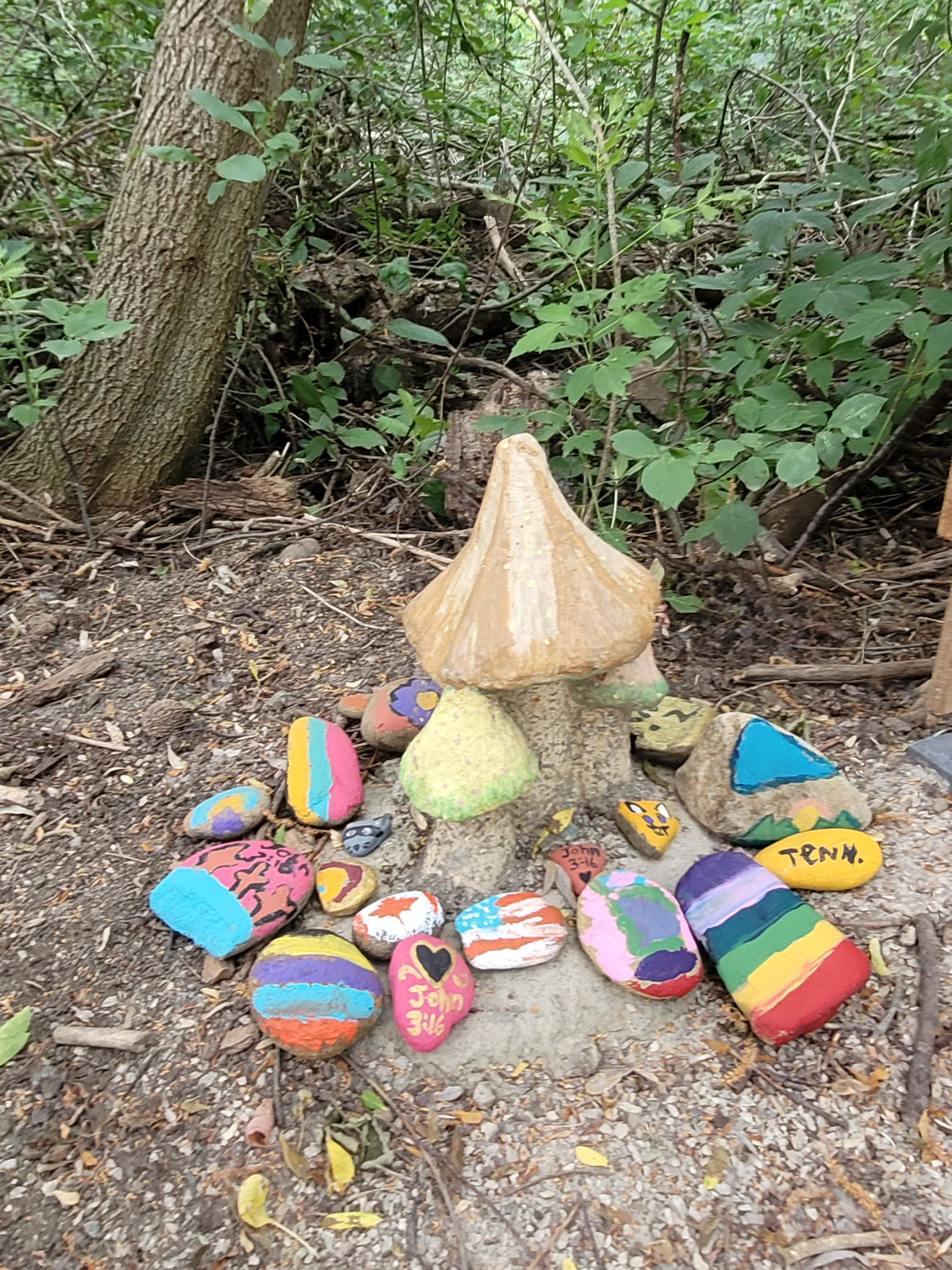 Children, or anyone, are encouraged to leave painted rocks at the Dreaming Bunny Bench. Include your first name, age and community on the bottom. Weatherproof paints are encouraged.